Urban Decay Pulp Fiction™ Eyeshadow Palette: An all-in-one palette that you’ll never need to reach out for others to complete a look

I never quite get the excitement on Urban Decay Pulp Fiction™ Eyeshadow Palette until I started using a few weeks ago. Let’s be honest here. It’s certainly not a love at first sight when I first saw the palette appearing all over YouTube a few months ago. After watching numerous Mrs. Mia Wallace-alike makeup transformation video, I still don’t get what’s the deal with the palette. It looks normal on the front, doesn’t make me scream upon looking on the inside and the shades are…..normal. 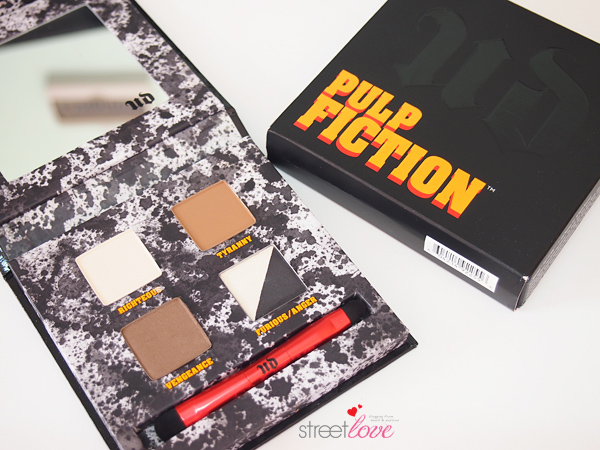 Here’s a fact. I was kinda nervous when I was sent the Urban Decay Pulp Fiction Eyeshadow Palette to try #notasponsoredreview because this is a full on neutral, smokey palette, which also mean there is no other color to play with. Although I’ve been dipping my toes into neutral shades lately but I still dab on at least one color to balance the look. It’s like a personalized makeup technique of mine 🙂 . Can you imagine how nerve wrecking it is for me not to be able to play with colors? lol.

The whole Pulp Fiction™ collection came about as Urban Decay is a diehard fan of the film and this year, 2014 marks the twentieth anniversary of the release of the film. So the team then decided to commemorate the occasion by creating and releasing an ultra limited-edition “PULP FICTION” collaboration. They called it the UD way 😀 . The inspiration of the collection is from the cool and completely bada$$ Mrs. Mia Wallace (according to Urban Decay) *cough*. This collection may be small but it has everything that you possibly need to recreate Mia’s dark, edgy look from the film. The palette itself contains five shades of eyeshadow and three out of the five shades are brand new. 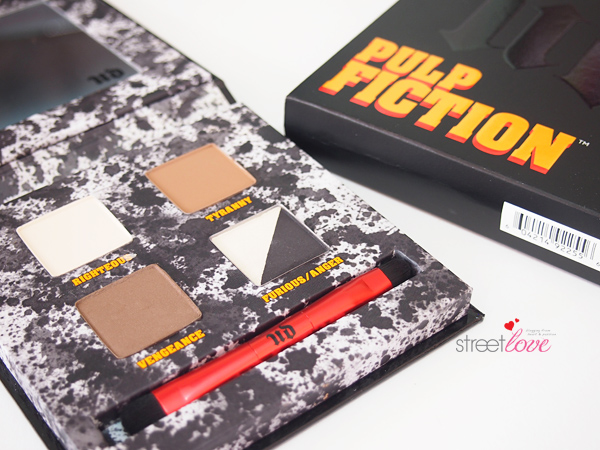 The shiny black case is made from hard and thick cardboard paper. On the front features the fateful Ezekiel passage voiced by Jules Winnfield in the film. For a four pan eyeshadow, this packaging is quite a bulky and huge one. I did not expect such a big palm size palette landed on my desk. There is also a huge mirror on the inside that was protected with a plastic. 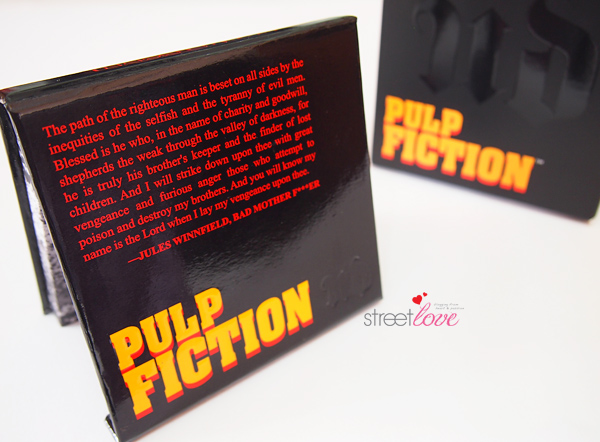 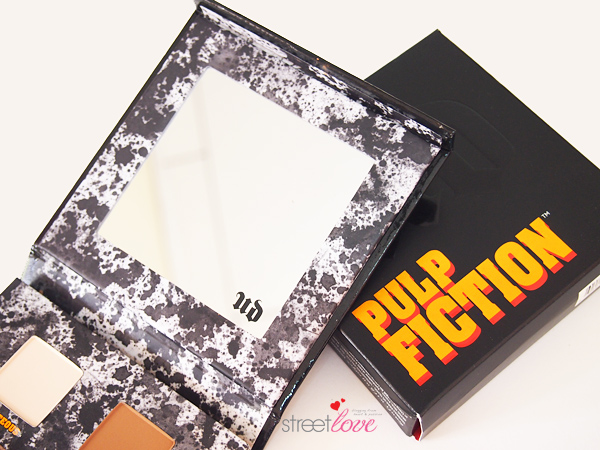 Each shade features Urban Decay’s Pigment Infusion System™, the proprietary blend of ingredients that gives every shade its velvety texture, rich color, serious staying power and blendability. As mentioned earlier, three out of five shades are completely new but it wasn’t stated which two are existing shades and which three are new shades so I wasn’t able to tell you which is which as I’m quite new to Urban Decay eyeshadow as well.

Overall, the shades included are quite warm toned, rich in color and pigmentation, buttery soft, goes on smooth without patchiness and easy to blend. What I like the most is although these eyeshadow can be a little bit too powdery, it doesn’t irritate my eyes or make them teary. Now, that’s a plus point for someone with sensitive eyes like mine 🙂 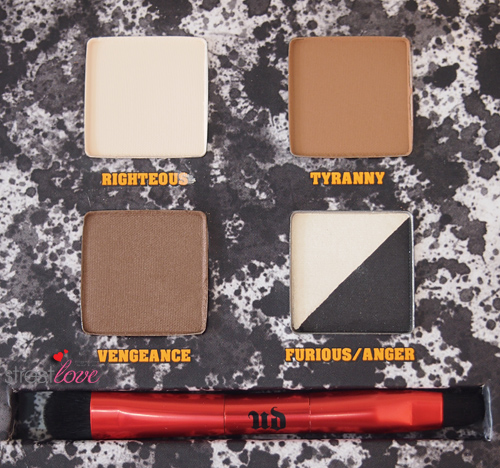 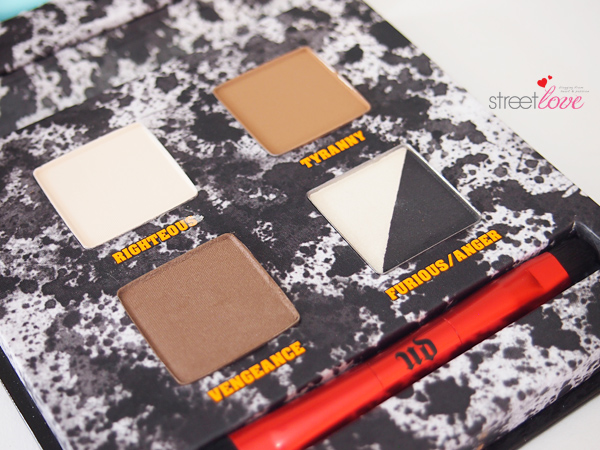 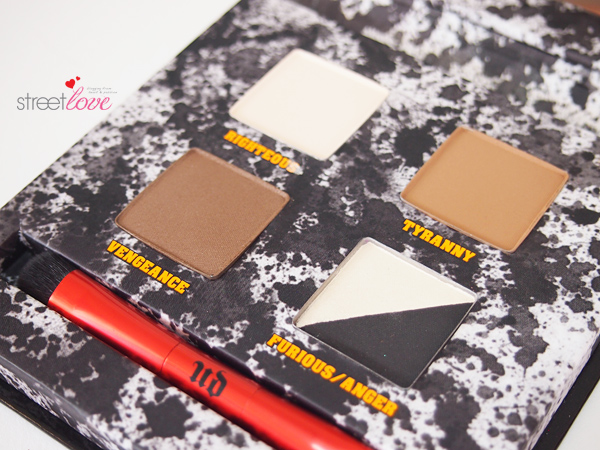 What surprised me the most is this blood-red double-ended brush that was included in the compact. It’s a brush with a compact shadow brush at one end and a multitasker brush at another end. The quality is top notch, heavy on the hand and the bristles are the softest, which is a rare find for complimentary brush. 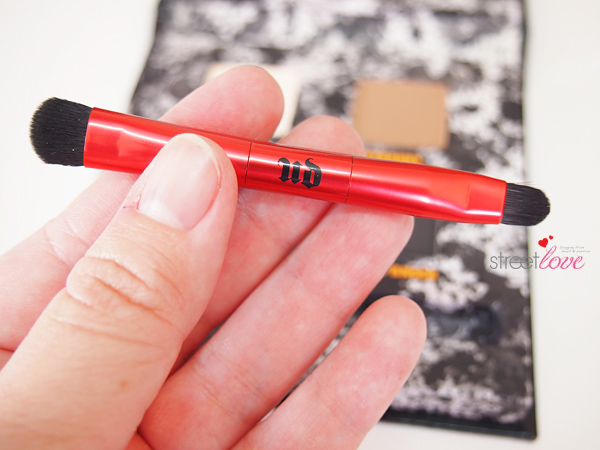 Here are the obligatory hand swatch for all shades. All five shades are easy to swatch except for Righteous as I layer the color a few times in order to get the opacity that I want. My favourite shade would be Righteous as I usually used a lot of base shade like this shade on top of eye primer and Tyranny as it’s a versatile shade to work with. I can use it as transition color, all over the lid, to smudge a black eyeliner with and even to line the bottom lashline. 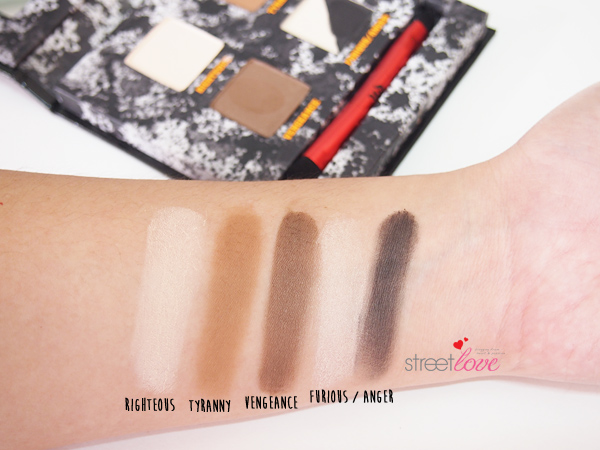 A palette to recreate Mrs. Mia Wallace look will not complete if it doesn’t come with a “Get the Look” step-by-step instructions card. However there is a typo mistake on the card whereas Furious and Anger was printed the other way round. On the card it is stated to use Anger to highlight the inner corner and brow bone. Nope, you wouldn’t want to use a black shade as highlighter 😀 😀 . So now you know alright? 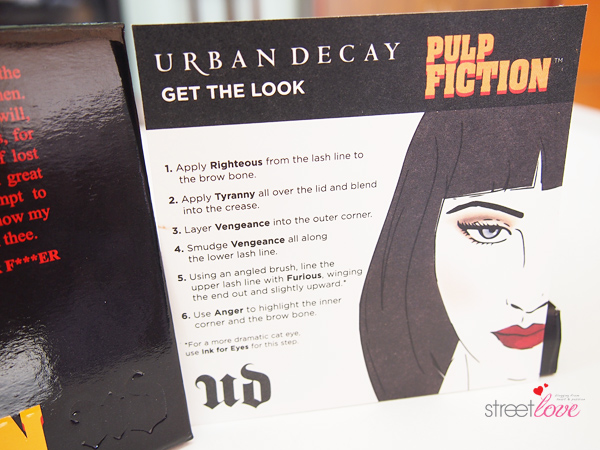 Anyway, I received this palette as a press gift with no review obligation. After I used it for the first time, I was totally blown away with everything of the palette that I told myself I must tell you girls about it. I know some of you do share the same thought on the palette when you’re seeing it as it is – nothing special. It is true that this palette is nothing special as we are Asian and we don’t like to layer eyeshadow just like how we don’t like to layer skincare like the Japanese or Korean. But I do! At first glance this palette is a typical neutral-y or a smokey eye palette to some. No doubt you can get the dupes for each shade but that would mean you’d need to get ready probably 3-5 palettes in order to create a look? When I need to do a full on neutral look, all I need is just this Urban Decay Pulp Fiction Eyeshadow Palette. Don’t believe me? Follow me as I show you how to create not one but THREE different eye makeup tutorial using just this palette alone.

Since Urban Decay included a step-by-step instructions card on how to recreate Mrs. Mia Wallace look, I shall start with that 🙂 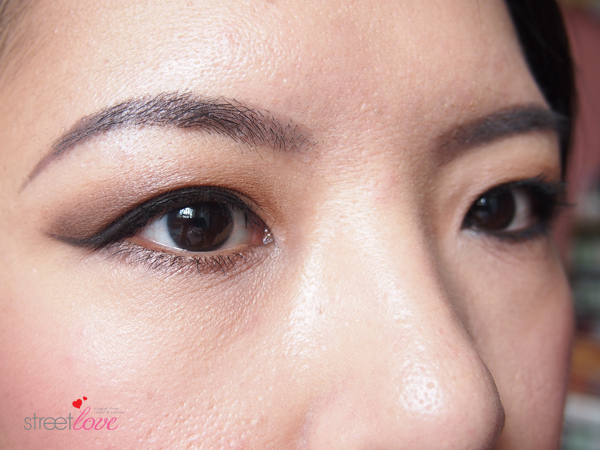 (1) Sweep Righteous all over the lid from the lashline up until the brow bone using a blending brush.
(2) Using the same blending brush, dip the brush into Tyranny and apply onto the entire lid until the crease line. If you don’t have crease line like me #typicalasianeyes, just open your eyes and look straight into the mirror. A few mm above your crease would be the invisible crease line.
(3) Dip your brush into Vengeance and apply onto the outer V.
(4) Take a smaller tip brush, dip into the same shade and apply along the entire lower lash line. Now this is my own trick. Use a clean blending brush, dip slightly into Righteous and blend all shades together on the invisible crease. This will soften any harsh line on the crease.
(5) Take an angled flat brush, drip into Anger and line the upper lash line. Create a winged at the end.
(6) Use a flat brush and apply Furious onto the brow bone. 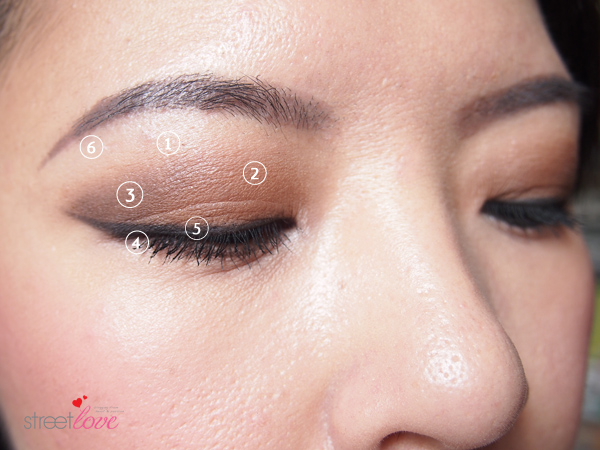 I can’t just show you other tutorials without showing you my version right? Heeee! This is how I would do my eye makeup on daily basis. 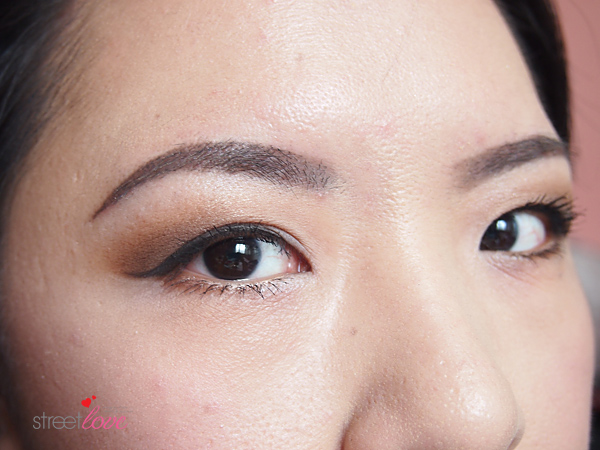 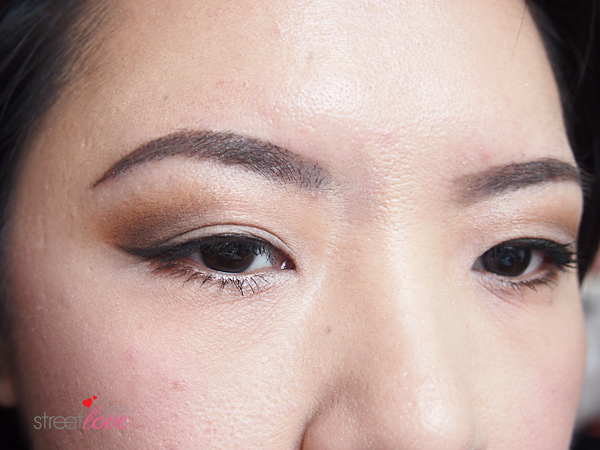 (1) Sweep Righteous all over the lid from the lashline up until the brow bone using a blending brush.
(2) Use a crease brush, dip into Tyranny and blend onto the ‘invisible’ crease line, focusing on the outer 3/4 of the eye. Line 3/4 of the lower lash line as well.
(3) Take a another blending brush, dip lightly into Vengeance and apply on top Tyranny but make sure you apply slightly lower so that it will look like a gradient. Take the same brush used for Tyranny and blend the crease line to soften any harsh line or to add on Tyranny if you accidentally covered it all with Vengeance.
(4) Take an angled flat brush, drip into Anger and line the upper lash line. Create a winged at the end.
(5) Apply Furious on to the brow bone, tear duct and on the inner 1/4 of the lower lash line. 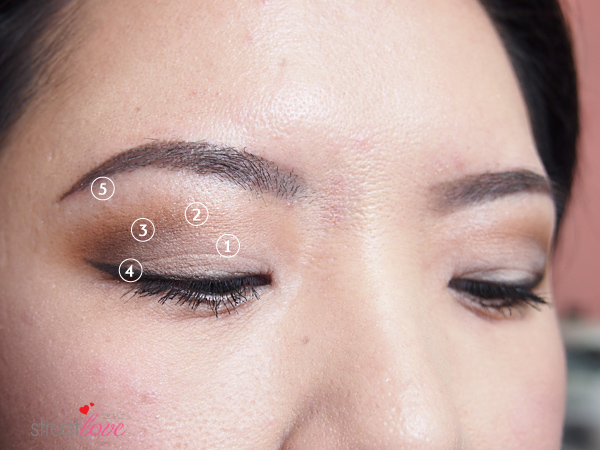 Not into so many steps or in a rush and you just want a very simple do? I’ve got that covered as well! 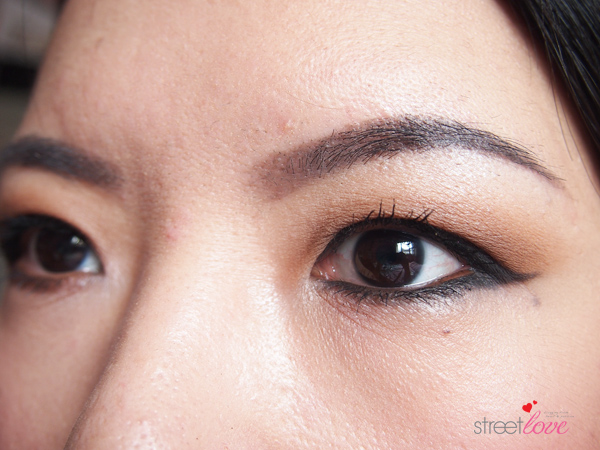 (1) Sweep Righteous all over the lid from the lashline up until the brow bone using a blending brush.
(2) Apply Tyranny all over the entire lid.
(3) Dip a clean blending brush into Righteous and use it to blend out any harsh line on the crease.
(4) Take an angled flat brush, drip into Anger and line the upper lash line, creating a wing at the end and drag it down to the entire lower lash line. Remember, the top and bottom line must be connected.
(5) Apply Furious on to the brow bone. 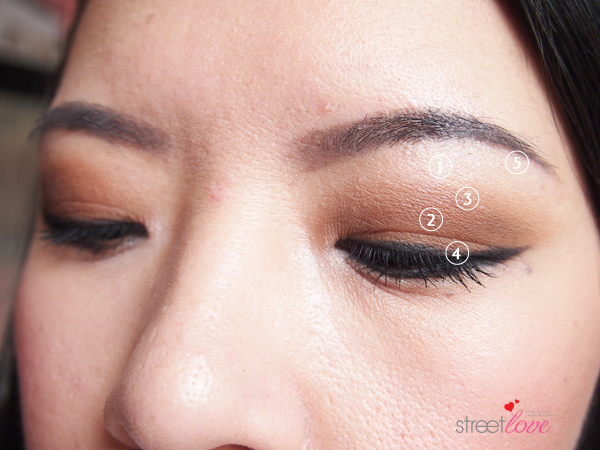 Of all shades in the palette, Anger caught me by surprised the most. I’m not a fan of black shadow or using a black shadow as eyeliner and I didn’t think I’d enjoy using Anger at all. It is so intense, so opaque, so easy to use as eyeliner and it doesn’t smudge on my oily lids.

Hope you enjoyed not one but three eye makeup tutorial for today using Urban Decay Pulp Fiction™ Eyeshadow Palette. I like it for it’s all-in-one shades in a palette that I need to create my everyday makeup look. I no longer find myself digging through the drawer for other palette for the perfect transition shade or the perfect highlight. I have it all in this palette. It’s no wonder this palette received so much love from all beauty gurus.

Which of the three eye makeup look you like the most? 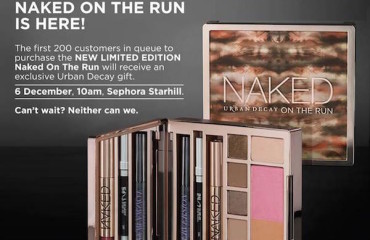 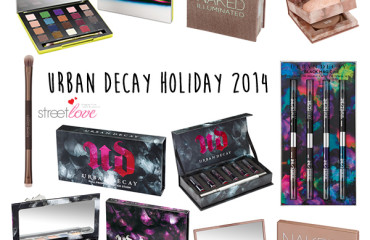 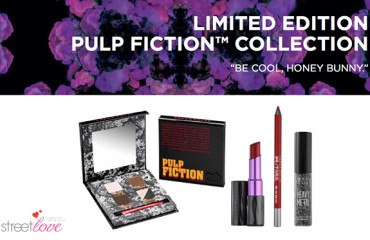