“I only need this highlighter in my life” – NOT! 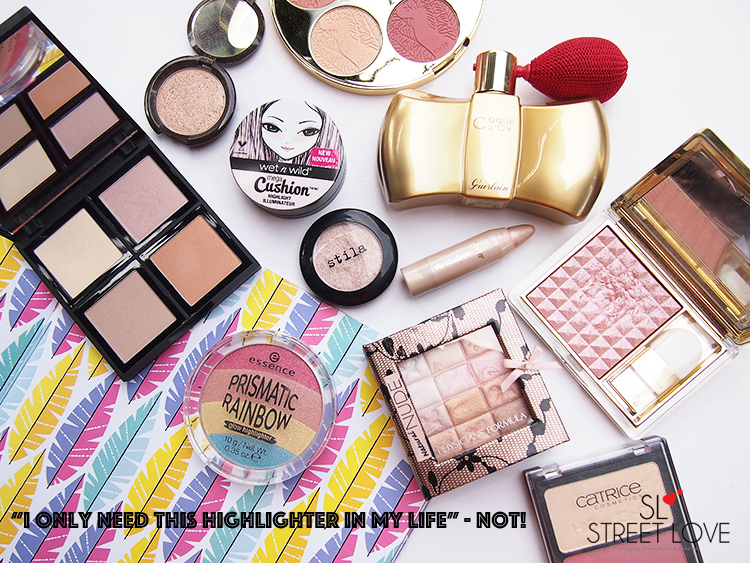 As much as I still go gaga or ooohhhs and ahhhhs over new highlighter releases, I don’t find myself wanting to purchase them. It’s getting stale. I find that everybody in the whole wide world is forever never ending releasing a new highlighter. It’s getting too repetition that I got bored and stopped buying highlighters. Let’s be honest here. Highlighter never finishes! I piled them up on my face every day and I don’t see that I’ll hit pan anytime soon. Let me show you my small little highlighter in my collection, which are my favourite and why I don’t purchase anymore highlighters.

Ultimate favourite, the one I regretted not buying a few more

I have heard Zoella talking about the Estée Lauder Pure Color Illuminating Powder Gelée Blush so many times that I regretted not getting it while I still can.

2 years ago, I went to Estée Lauder Staff Sale and I saw this! There she was, sitting beautifully on the table with no one near it. Everyone probably thinking it is too shimmery to be used as a blush but I knew this is not a blush type of blush but a darn pretty highlighter. I giggled my way to the table and grabbed one without blinking. Not even a split second. I had an urge to grabbed another one but I thought I wouldn’t use this as much as that time I wasn’t into all the contouring and highlighting routine. It was my one and only highlighter and I have used it so much so that it has a small dent to it. It’s a waste that Estée Lauder no longer make them anymore as they are the most absolute gorgeous highlighter ever. I was hoping that I will see this at the next warehouse sale but nope, these never make an appearance anymore. It was made in 2013 so Estée Lauder wouldn’t sell this at 2016 staff sale. No way I am throwing this away. There is something about a pink highlighter that goes on so beautifully on the skin. I never quite get this effect from other highlighter except from this. It’s the only highlighter that shows up on photos for me.

The one that shocked me and caught on camera

I tried this Physicians Formula Shimmer Strips All-in-1 Custom Nude Palette For Face & Eyes one day on camera and my shocking reaction was caught on point on camera. 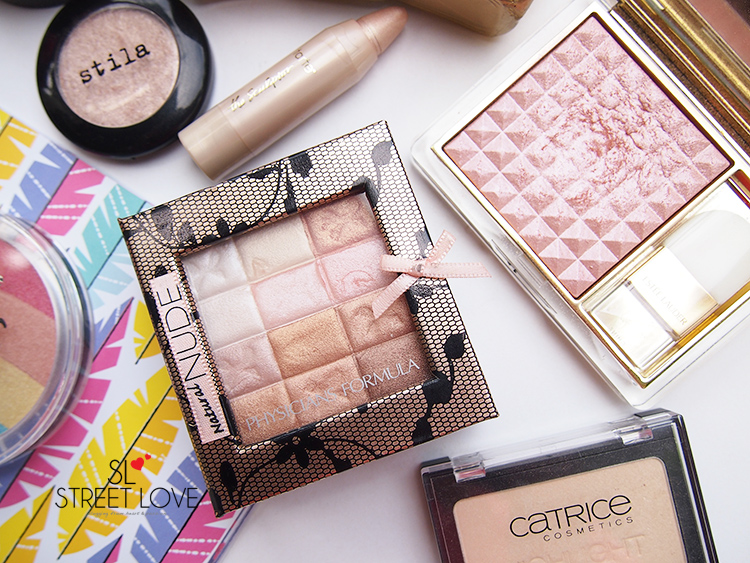 Not only this Shimmer Strips has a cute lace box packaging, albeit a bit bulky but I like lace so yeah. It is said for the face and eyes. So far I used it as highlighter as that’s what I learnt from international Youtubers. Plus I have a separate eye palette within the range for my eyes so I don’t use this for the eyes. Some people has been using the warm bronzey bottom as their bronzer but I find it to be too shimmery. As a topper yes, not as the main bronzer alone. I like to use the top two rows, run my brush on them several times and voilá. The highlighter is so blinding that it lasts the entire day. If you have darker skin, just swirl everything together. Another thing I notice is how fine the shimmers are. There aren’t much powder kick back to it. Although I have been using this like crazy, I still don’t see a dent. How is that even possible! I am so totally recommending this if you need a good highlighter that is absolutely affordable.

Waitlisted, bought and disappointed, the one that is cheap but does nothing

I wanted to complain about the ELF Illuminating Palette so much but it is so cheap, like RM26.84 cheap that I shut my mouth lol. 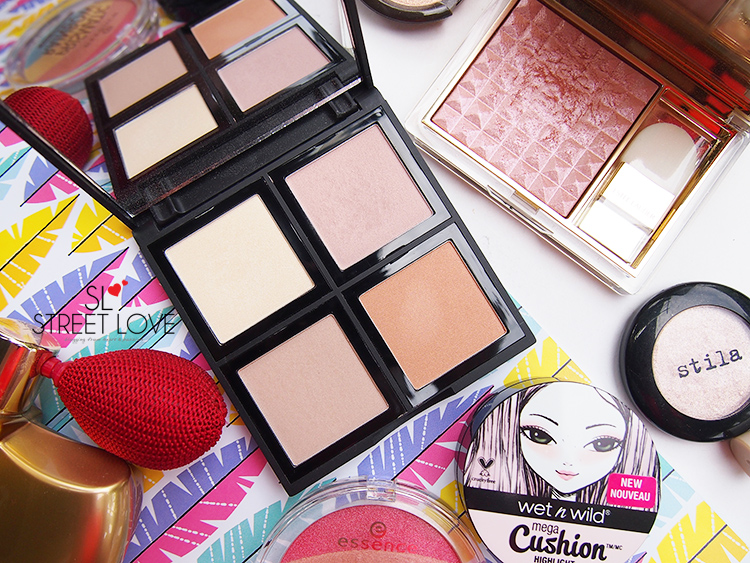 It was a disappointing palette to be honest. It has no pigmentation AT ALL. The only shade that is more shimmery is the 1st shade on the top left. The rest is more of a matte shade with no pigmentation at all. I don’t reach out for this palette at all nowadays as this palette require plenty of time piling up. And the end result is not wow even though so 🙁

Does better than how it look

I decided to lump these two Essence Prismatic Rainbow Glow Highlighter and Wet n Wild Mega Cushion Highlight together because my thoughts on them are pretty similar. 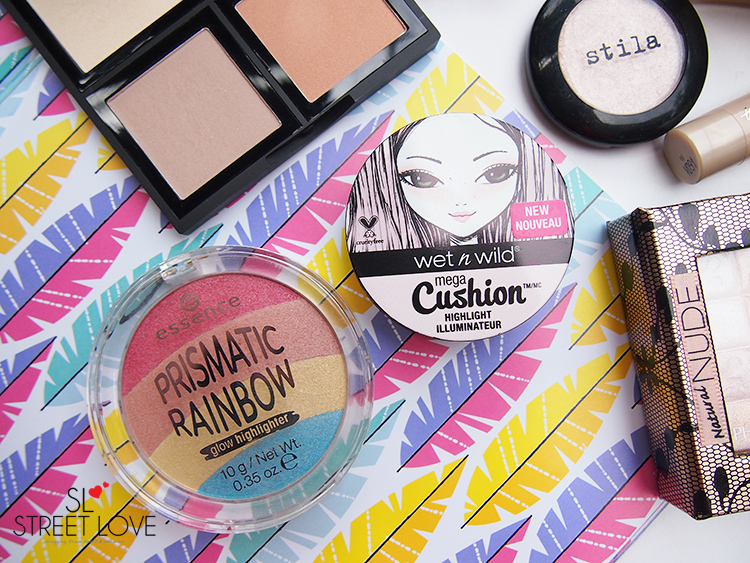 Essence Prismatic Rainbow Glow Highlighter is an exciting purchase this year. It is so cheap and it’s pretty interesting to see a rainbow highlighter turned into a golden highlight. It is beautiful on the skin, with super fine shimmers and almost no powder kick back. The highlight is subtle but definitely there type of highlighter. As it is a golden-ish type of highlight, I can’t see clearly in my dark room and I always end up piling them. What amazed me was that, no matter how much I used, it is not blinding or looking too overly done. It is still beautifully highlighting and yet not overly done type of highlighter.

Wet n Wild Mega Cushion Highlight on another hand requires a little bit of getting used to at first when it is new. At the beginning I ended up with a patchy highlight strip on the top of my cheeks and that freak me out. Later on I found a way around; and that is to tap on the back of my hand to even out the liquid highlight before dabbing it on my cheek bone. It is so gorgeous! I was blown away everytime I whipped this out to use. The end result looks like as I was using an expensive highlighter but actually this cost just $5.99 each. I’m glad I bought 2!

The most outrageous expensive highlighter I use

Ahhhh Guerlain Coque D’Or Perfumed Shimmer Powder Body & Hair. I fell in love with this mainly for its packaging. Do I have any use for perfumed powder? Not at all 😀 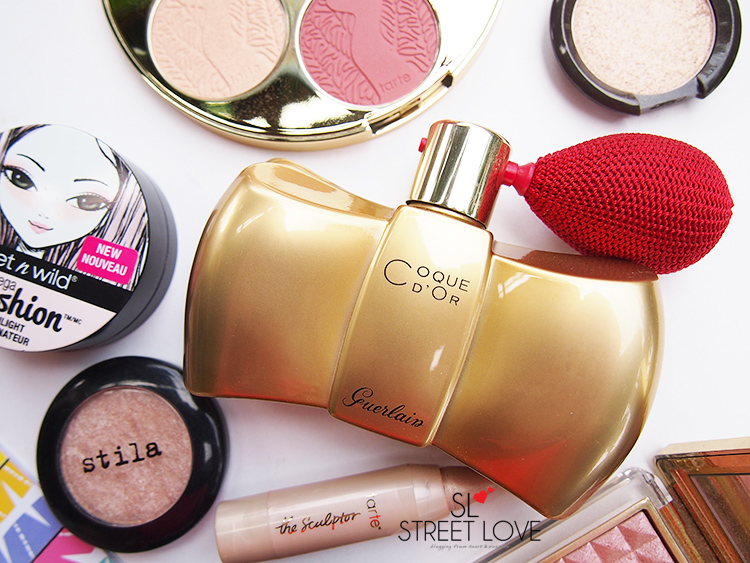 These days no one goes out with shimmery hair or skin unless you are in a photo shoot or fashion show. I missed the previous one so I told myself I have to get this. And I did. Then I ended up not knowing what to do with it. It cost me nearly RM400. I told myself it’s too expensive as vanity table decoration lol. So I ended up using it on my cheek bone as highlighter! It works but the misting has to be really precise and on point. If not and you need to spread it out with your fingers, you will find all the shimmers stick to your fingers instead of the face. It’s a waste of money I tell you lol. During my earlier highlighting days, I used to use this a lot but I can never get a precise mist. It always ended up on my cheeks rather than on my cheekbone. It also has fly away shimmers that tend to get on every other part of the face. It’s outrageous, it’s expensive and I’m using it as highlighter. Oh well 😛

Now, confession time. Which one of you cannot stop buying highlighter? I think I have problem to stop purchasing contour or bronzing product but highlighter? I don’t need a lot. So far I have been doing pretty good. 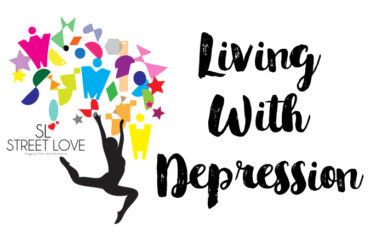 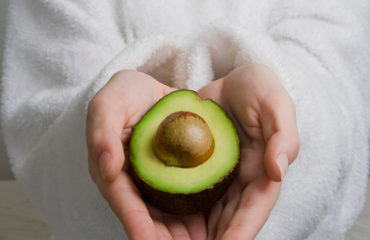 Natural Skincare – Inside and Out 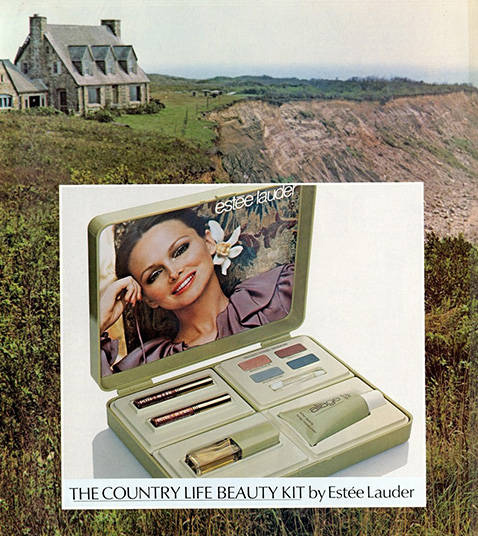