When I had my fringe chopped off a few weeks ago, many people were shocked and asked why the change because I have had the same hairstyle for ages. I’m a well-organized person and I like to plan for everything but I can get very random at times, which I think is important to change the rules a little, taking a step back and enjoy what life is all about. Living it!

Let me tell you a secret. The reason why I chopped off my fringe was because I saw this Bangs Cut Supporter at Mr. DIY. Immediately I thought I could easily do the first cut at home and then do follow-up trimming at home whenever needed. 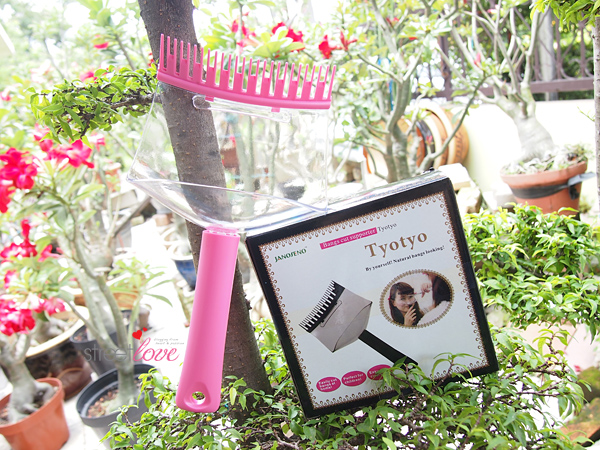 So as I said earlier, I assume that I would be able to do the first fringe cut at home easily with this tool. I don’t think it will be hard but I was afraid. After all it’s the first cut. I wouldn’t want to mess up and having to live with badly cut fringe for a few weeks 😀 . So I went to a hair salon. Honestly speaking, I don’t think so the salon did a good job either. I hated my fringe for the first two weeks. When the hair started to grow out and I was heading to Penang, I had them comb to the side again as I knew I would get all sweaty in Penang. On the same night I was back to KL, I took out this Bangs Cut Supporter to trim my fringe.

It is quite rare for me to do a season trend look, what more a hair trend. Not that I don’t want to do but I didn’t have any information on hand nor am I the expert. Just last week I was at the launch of Shiseido Professional Stage Works Spiky Booster and I was handed the 2014 Spring/Summer hair trends book, which Shiseido Professional named as COLOR ME KNOT. I was so interested with the content and I thought why not share it with you girls too 😀 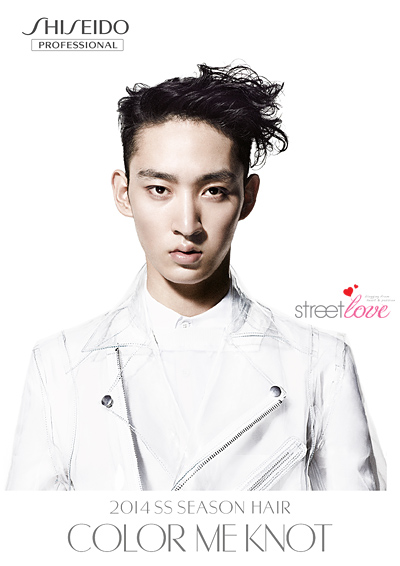 Just to recap what I said earlier in Shiseido Professional Stage Works Spiky Booster launch post. Mr. Yoshiyuki Takahashi shared the latest trend in Japan. He said that most magazine in Japan now features lots of white-based color coordination. So Shiseido Professional creative team back at Tokyo Japan studied the trend and came up with COLOR ME KNOT. It is a nuance of accentuating the colors of hair and fashion styles in contrast with blank canvas of white. But this White in 2014 Spring/Summer will be powerful, futuristic, sharp, mysterious and goes well with everything. However it will not be completely full white. So for this season, Shiseido Professional had came up with Wet & Dry, Natural & Strong and Tight & Flared hair styles that will complement the white well.

I’m sure you still remember the hair chalk craze. It wasn’t long ago that almost every single girl that I know went cray cray over hair chalk. Just when you thought hair chalking trend has died down and taken over by dip dye phenomena, L’Oreal Professionnel HAIRchalk makes a big debut at the Spring/ Summer 14 Catwalks causing a stir on the fashion & beauty scene.

L’Oreal Professionnel HAIRchalk is an easy way to colour your hair without the permanent chemical damaging. It doesn’t stain your clothes thereafter and it last up to 4 to 5 washes, unlike the old school hair chalk that is a pain to apply and doesn’t last more than one wash. Two days ago I have the opportunity to try out this new trademark technology trendsetter HAIRchalk at Centro Hair Salon, The Gardens Mid Valley and be one of the trendsetter 😀 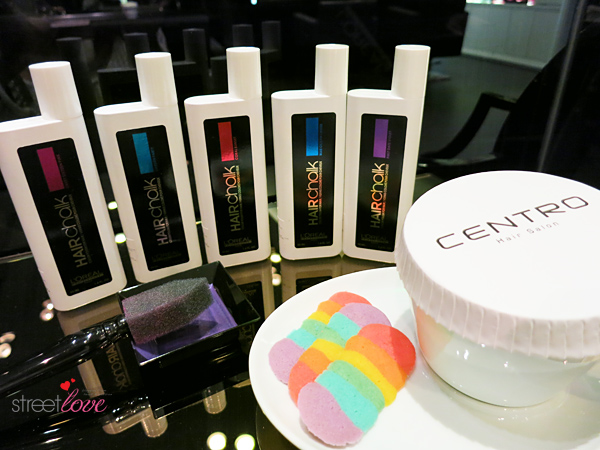 After getting all the info that I needed from a quick and informative brief about L’Oreal Professionnel HAIRchalk, I was handed over or rather my hair was handed over to Kevin Woo, Creative Director of Centro Hair Salon for a hair assessment and style consultation. As you know I wasn’t that much of a trendy girl when it comes to my hair style so I let it to the creative hands of Kevin. Kevin took a look at my current hair style, length and scalp condition and quickly spotted that I have dry and sensitive scalp. But not to worry, L’Oreal Professionnel HAIRchalk is safe to use even on sensitive scalp like mine. Kevin said turquoise color or in L’Oreal Professionnel HAIRchalk term it’s Garden Party would look good with my hair color. I trust the expert so I have no objection at all.

A year ago I stumbled upon a Youtube video on this simple, cute side braided bun and I’ve been doing the hair style since. I must admit, having all your hair up in a bun is not a favourite here because you could risk looking like an “auntie”. The last time I had my hair up in a bun is during my ballet classes 😀 . Boy it was a competition on who have the neatest and nicest hair bun of all!

I’ve seen some stylish girls doing it and it actually looks good. The key to this look is to put on jewellery, pairing the look with modern attire such as dresses and don’t forget the makeup 🙂 . For this side branded bun hair tutorial, I’ve only put on a light makeup as I was in a hurry. Hope you like this hair-do! 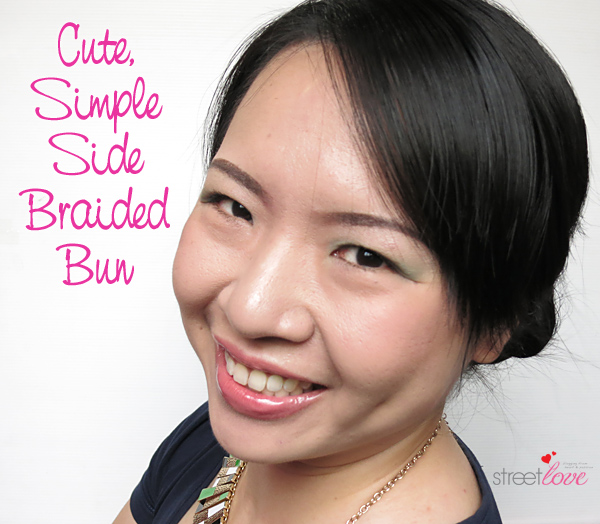 Hair Tutorial: Wrap-Around Half Do with Kérastase Couture Styling

If you’re my Instagram or Facebook page follower you’ll definitely remember this wrap-around half do which I shared a few months ago. I know I know, I promised you a hair tutorial on this hair-do. It took me this long to finally do it because of two reason. (1) This auntie have totally forgotten about it as usual lol and (2) I haven’t figure out how to take photo of my head from the back.

I’ve been toying around with some styling products from Kérastase Couture Styling range and recreating this wrap-around half do. Let me tell ya’ recreating this hair-do is not easy at all but here is the tutorial as promised 😀 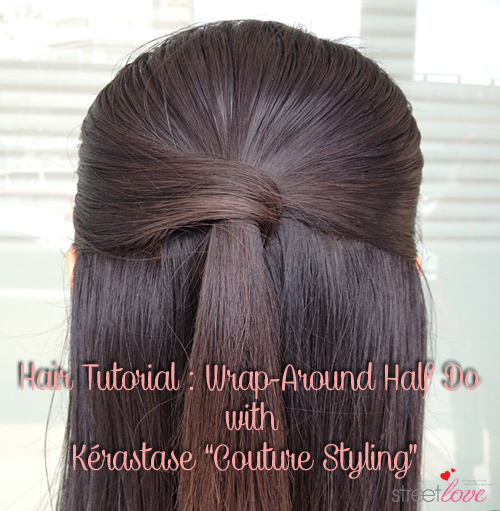 The first time I tried doing this wrap-around half do is in the office. That time I’m equipped with just a comb, a few hair tie, a few bobby pin, a can of hair spray and I nailed it on first try. Not only recreating the same hair-do is difficult, I also face with the shooting challenge as well. My bigger camera is once again sent to the service centre so I have no choice but to use a smaller camera. Some photos may be a bit blurry as I can’t see the camera screen at all. I think you get what I mean 🙂

If you’ve notice, my hair style is no longer straight but rather curly. That’s because at the beginning of March I went to do a digital perm at Miko Kajang. I have no idea what had gone into me. I went home after a Saturday shopping at KLCC and I said to my mum “I have decided”. My cluessless mum was curious on what is it that I have decided. That’s when I told her I’ve decided to perm my hair! So random I know.

Instead of wasting time asking around friends which is the best hair salon to go, I waste no time thinking or asking and I checked in Miko which is located at Kajang Prima. Apparently they’re running a promo for digital perm for all hair length for RM199 but because my hair was too straight the stylist don’t recommend that. But instead she recommend me using L’Oreal products for my perm which cost me RM350! I actually thought (can’t blame me, never been to that salon before mah!) that she just wanna cheat me off but since there’s a warranty for the perm that I wanted if I use L’Oreal, I agreed. She couldn’t agree on a discount however but later on ended up giving me a 10% discount which sums up to RM315. I wanted to shorten my hair a little bit and it’s free of charge too. I took this perming opportunity to part my hair line from left to center as well 🙂

The hair cut process was very slow. The stylist really took her time cutting my hair which I appreciate rather than cutting is hurriedly. Then she apply the curling cream (smells nice too) and left it for 45 minutes I think. 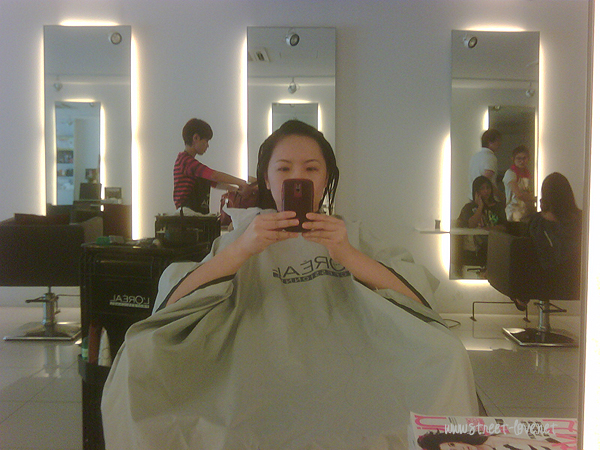 After washing off the cream, she and her colleague start to curl my hair with the plastic curler (heavy one too) and hooked all the curler to a machine. Yeap. I do felt like I’m in Men In Black. I wanted a big curl but she said big curl doesn’t last long so she did a medium curl instead. After some time the curl will be something like big curl.